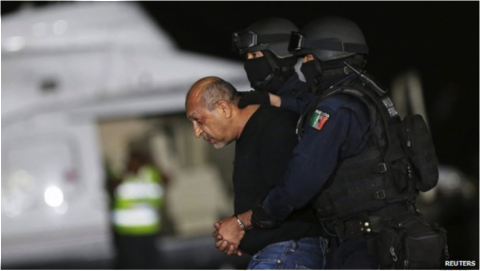 ‘A Necessary Evil’: the Capture of ‘La Tuta’ in Light of the Mexican Context


Mexico
“Boost for President Peña Nieto in fight against warring drug gangs and in wake of public revulsion over abduction of trainee teachers”  (The Guardian, 2015)

Many news sources have framed the recent capture of Servando ‘La Tuta’ Gomez, Mexico’s most wanted drug lord, as a positive development and a boost for the war on drugs. Gomez is the leader of the Knights Templar, a drug cartel that controls almost the entire Mexican Michoacán state. His capture is portrayed as the first major victory for president Peña Nieto’s anti-organized crime policy since the abduction and possible murder of 43 trainees last year clearly illustrated the administration’s failures to re-establish public security. The question, however, is to what extent the capture of the drug lord will actually lead to a reduction in violence. The gang violence and the capture of Gomez should be seen in the context of the deep levels of violence and corruption within Mexican institutions. The capture of Gomez might be a good thing in the sense that it combats impunity, but it is not to be seen as a sign that the war on drugs is succeeding.

In Mexico, violence and corruption run to the heart of both state institutions and society. According to Briscoe (2015), the entwinement of illicit networks and state institutions allows state officials to exploit their power in order to help criminal organizations for their own profit, which threatens the stability and legitimacy of the state. However, as described by Snyder and Duran-Martinez (2009), illegality within the system need not lead to higher levels of violence. For a long time criminal organizations in Mexico have been protected by state sponsored protection rackets, through which state officials selectively enforce the law in favor of criminal organizations, in exchange for non-violent behavior and information, creating a certain degree of stability. However, since these rackets have broken down, criminal organizations are forced to seek other ways of ensuring protection, which leads to competition and higher levels of violence. Within the context of a corrupt system and an illegitimate state, Gomez has been able to bribe the police and gain control over almost the entire Michoacán state.

As described by Felbab-Brown (2013), the government’s anti-organized crime policy largely focuses on high-value targeting. According to this approach, the capturing of prominent leaders within drug cartels is important in combatting gang violence. This idea is clearly visible within the policy of President Peña Nieto. Since the abduction of 43 trainees last year, the arrest of Gomez has been a top priority. However, as argued by Felbab-Brown, merely focusing on the high-value targets is not enough. If a high-value target is captured or when a large drug cartel breaks down, a vacuum arises in which younger gang members or smaller cartels can take over respectively. Gomez himself once said: “We are a necessary evil. Unfortunately, or fortunately, we are here. If we weren’t, another group would come.” Fact is, this infamous man has a point. As long as state institutions are not strong enough to restore public order, the breaking up of cartels will only lead to smaller cartels competing for power, which may produce even higher levels of violence. The capture of the drug lord may have a large symbolic power, and in this sense it is indeed a boost for the President’s policy. However, it cannot be described as an actual victory in the war on drugs.

What we can conclude is that while the capture of Gomez might send a symbolic message of combatting impunity, it will not break down the cartel or significantly reduce violence. As argued by Felbab-Brown, to significantly weaken the cartel, targeting the middle layer of gangs will be more productive. This will limit the capacity to replace the group’s leaders and harm its operational capacity. However, to actually make progress in combatting the drug gangs and the levels of violence, merely tackling the drug cartels will not suffice. To again quote Gomez: “If they say that the problem is me and the Knights Templar, and that we are responsible for everything happening in Michoacán, well, let the federal and state institutions take action against us and establish the rule of law. We completely agree with that.” Of course one should not rely on a devious man’s words, but Gomez does make a valid point. By bringing down the Knights Templar not every problem will be solved. Instead, it is most important for the state to strengthen its institutions, increase its legitimacy and establish the rule of law.

Briscoe, I. (2014). The Historical Development of the Nexus between Politics, Crime and the Economy in Latin America. In I. Briscoe, C. Perdomo & C. U. Burcher (Eds.), Illicit  Networks and Politics in Latin America (pp. 31-54). Stockholm: International Institute for Democracy and Electoral Assistance, Netherlands Institute for Multiparty Democracy and Clingendael’s Conflict Research Unit.