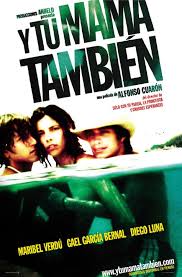 Y TU MAMÁ TAMBIÉN – win tickets! Send an email to info[at]consentido.nl, and tell us what you favorite movie with Gael García Bernal or Diego Luna is! By emailing us you can win 2 x 2 tickets for the screening on 18 November!

This coming of age – road movie by Alfonso Cuarón was one of the most successfull Mexican films ever made. It’s screenplay was nominated for an Oscar.

“At first appearance, the Mexican film Y Tu Mamá También looks like a film about the increasingly conflictive situation of two boys. However, the film should be seen as an allegory on the conflictive relationship of the two strata of the Mexican elite. A third person, a Spanish woman, also allegorically built into the narrative, is the intervening agent that brings this conflict out into the open.”