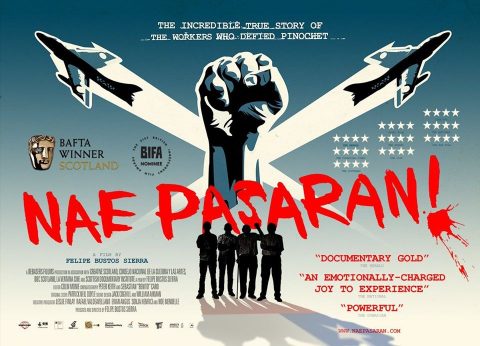 1974. In solidarity against the brutal Chilean coup six months earlier, Scottish factory workers know where they stand. They refuse to repair aircraft engines from the Chilean Air Force. Through sheer persistence, they keep the engines in Scotland for four years, until they mysteriously vanish one night. Forty years later, the tremendous impact of their gesture, long believed to be meaningless, is finally revealed.

The film will be followed by a Q&A with the film director, Felipe Bustos Sierra.

Bustos Sierra is a Chilean-Belgian film director, producer and editor based in Scotland. His debut feature-length documentary, Nae Pasaran (2018), won the Best Feature award at the 2018 British Academy Scotland Awards, where Sierra was also nominated for Best Director (Factual).

Dutch Premiere of Nae Pasaran is part of the opening of the Human Rights Weekend 2020 organized by Human Rights Watch and De Balie. Find out where you stand and learn more about human rights, by participating in a weekend of films, discussions, and more. Meet film directors, Human Rights Watch researchers, journalists, and others and discover your position on topics such as the link between human rights violations and your clothing, the struggles involved in being intersex, and the use of protest as a tool for change. The event covers a wide range of countries, from France to China and from Bangladesh to Chile.