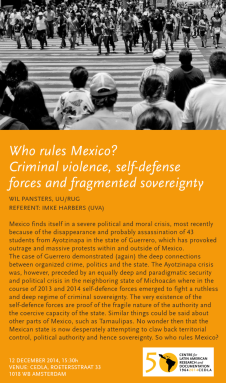 Mexico finds itself in a severe political and moral crisis, most recently because of the disappearance and probably assassination of 43 students from Ayotzinapa in the state of Guerrero, which has provoked outrage and massive protests within and outside of Mexico. The case of Guerrero demonstrated (again) the deep connections between organized crime, politics and the state. The Ayotzinapa crisis was, however, preceded by an equally deep and paradigmatic security and political crisis in the neighboring state of Michoacán where in the course of 2013 and 2014 self-defence forces emerged to fight a ruthless and deep regime of criminal sovereignty. The very existence of the self-defence forces are proof of the fragile nature of the authority and the coercive capacity of the state. Similar things could be said about other parts of Mexico, such as Tamaulipas. No wonder then that the Mexican state is now desperately attempting to claw back territorial control, political authority and hence sovereignty. So who rules Mexico?

Wil G. Pansters is head of Department of Social Sciences at University College Utrecht and professor of Social Sciences at Utrecht University. In 2008, he was appointed Professor of Latin American Studies atUniversity of Groningen and he is also director of the Centro de Estudios Mexicanos in Groningen. He has been a research fellow at El Colegio deMéxico (Mexico), and the University of Oxford amongst others. In 2012, he occupied the Friedrich Katz Chair at the Universidad Autónoma de Ciudad Juárez. Over the years, he has had the opportunity to do field research in Mexico, both ethnographic and historical, and he has published on political culture, regional history, democratisation and social change. Currently he focuses his research mainly on the meanings of (drugs related) violence in politics and society, and on the search of people for justice in environments of insecurity. Outside of the academic world, Wil Pansters is actively involved as speaker in debates, public lectures and in various media. His most recent book is Violence, Coercion and State-Making in Twentieth Century Mexico. The Other Half of the Centaur (Stanford: Stanford University Press, 2012). In 2011 he received the Orden del Águila Azteca from the Mexican government.