Violence in the favela’s 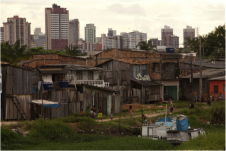 On November 4, 2014 ten boys and young men were murdered in the Terra Firme favela, one of the poorest and most violent areas in the state of Para in Brazil. The attacks happened just two hours after Antonio Figueiredo, a corporal in Brazil’s military street police, had been shot to death. Besides being a cop, Figueiredo was also the head of a violent criminal gang – mainly composed of police officers – that operated in the neighboring favela of Guama. In Brazil, these teams of police officers are also... » meer lezen