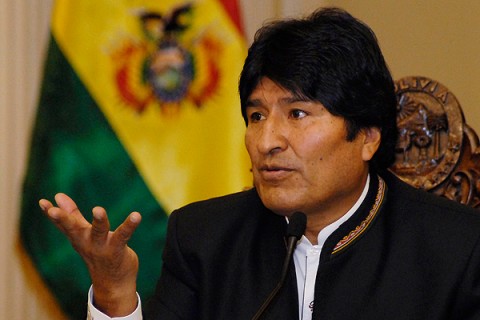 This article was first published on Global Risk Insights (GRI).

After winning the 2014 elections by a landslide and maintaining his two-thirds majority in the lower and upper houses of the Assembly, Bolivian President Evo Morales now has both the political capital and the majority to amend the constitution. What are the risk and opportunities of another term for Evo Morales?

In mid-September, president Evo Morales announced that he would run for a fourth term, over the period 2020-2025.

Morales is not the first in the region to seek a term extension. His leftist peers Rafael Correa (Ecuador) and Hugo Chávez (Venezuela) both achieved the same, while right-wing candidates Carlos Menem (Argentina) and Álvaro Uribe (Colombia) managed to get a first term extension, but not a second one. However, the move is a contemporary novelty for Bolivia, which had six presidents in the ten years before Morales came to power.

Morales’ presidential stability has allowed him to carry out many long-term projects. He has invested strongly in infrastructure, put in place effective redistribution schemes for the poor, and maintained relatively prudent macroeconomic management.

As a result, Bolivia has grown on average by 5.1 percent per year since Morales came to power, and is projected to grow by 4.3 percent this and next year, despite a global crash in commodity prices. Meanwhile, government debt as a proportion of GDP has only declined.

Moreover, Morales’ presidency has given rise to a new enterprising class of indigenous entrepreneurs who were previously excluded from the formal economy. Growth has become more inclusive and inequality has fallen markedly.

But Morales’ incumbency, which began in 2006, has also come with a dark side. Many state institutions have become dominated by his party Movimiento al Socialismo (MAS) and his allies. Allegations abound of political opponents subject to persecution through the judiciary. Furthermore, the climate for NGOs and journalists critical of the government has worsened, with vice-president Álvaro García Linera lashing out this summer against foreign organisations.

Not all bad for business

Often compared with Venezuelan firebrand president Hugo Chávez, Evo Morales has not been viewed positively by international and domestic business.

Upon his election in 2006, he nationalized the country’s natural gas industry and then quickly moved to nationalize other assets such as airports, mining operations, telecommunications firms, and a smelter owned by Swiss miner Glencore.

Yet more recently, Morales seems to have lost his appetite for expropriation. After his last election in October 2013, Morales pledged not to carry out any more major nationalization projects, and although he has suggested higher taxes for some industries, international firms working with the government in mining projects, for example, have been left alone.

Moreover, despite his revolutionary credentials, Morales has managed to maintain a relatively stable macroeconomic environment. Unlike his peers in Argentina, Ecuador, and Venezuela, Bolivia has a modest inflation rate, a low debt burden, ample foreign-exchange reserves, and little government intervention in most sectors.

Such characteristics make economic turmoil, like that currently in Venezuela, unlikely. Despite the economy’s dependence on commodities such as natural gas, minerals, and soybeans, Bolivia has so far withstood a global drop in commodity prices – partly thanks to stable long-term gas contracts.

However, Morales managed to widen the basis of his political support before the 2014 elections, drawing in large swathes of the Bolivian middle class. He has also continued to mend fences with a large part of the country’s economic elites. The latest polls in December 2014 showed him reaching a 75-percent approval rating, although his party has been dogged by corruption scandals and recently lost a number of important mayoralties.

The end of the commodities boom may yet spell disaster for the Bolivian government. Latin American governments, from Ecuador to Brazil, and Venezuela to Colombia, have seen their tax bases shrivel, and have lost popularity partially due to steep budget costs. Although Bolivia has more wiggle room than its neighbors next door, it may also have to start cutting within the next few years

Moreover, Morales’ decision to push for a fourth term could also bring about political fallout. Rafael Correa’s announcement last year that he would reform the constitution to run for another term galvanized opposition in Ecuador, causing large street protests and political upheaval.

Although Morales enjoys strong approval, the prospect of another 10 years in office may have a similar effect.