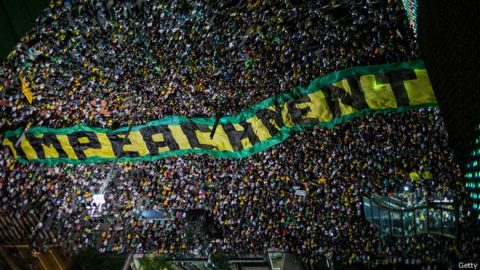 This text explores the current political instability in Brazil. Focusing on the impeachment process against President Dilma Rousseff (examined and judged by the same Senate that voted her out), the authors analyze recently published facts of Brazilian politics and describe the debate about the legitimacy of the accusations and the legality of the process.

Brazil is facing a moment of severe political instability. President Dilma Rousseff was put away by the vote of the majority of the Senate. While an impeachment trial against her gets examined and judged, by the same Senate, a strong debate about the legitimacy of the accusations and the legality of the process is in play.

President Dilma is accused of committing misdemeanors involving “budgetary maneuvers” and complementary credits without previous legislative authorization. Regarding the first charge, the Brazilian Treasure, as a general rule, transfers financial resources to public banks, which represent the vehicle for paying for social programs. The accusation pleads that the Treasure has not transferred the resources to the banks on time for paying for the social programs. Yet, the banks did maintain the transfers to the beneficiaries. This can be understood as a form of loan or credit operation, which is forbidden by the Fiscal Responsibility Act. Remarkably, the delays in money transfers from the government to public banks happened in 2013 and 2014, but at this time, the Brazilian Federal Court of Auditors (TCU) did not label it as a credit operation. When in 2015 the Court changed its understanding and begun to consider this operation illegal, Rousseff’s government followed the new understanding and stopped allowing the delays. The accusations of complementary credits travel in the same deceiving path. All six decrees mentioned in the impeachment request were based on financial resources reallocation, excess of tax collection or financial surplus. However, while complementary credits require a reallocation of financial values, they do not imply an increase in public spending and cannot hold as legitimate charges against president Dilma.

In short, the arguments for Dilma’s impeachment are legally weak. Notably, no corruption charges have been raised against her, but the impeachment process is sponsored by a group of congressmen who have been deeply involved in corruption cases for several years. It cannot be called a coincidence the fact that the impeachment process was accepted for evaluation in the Chamber of Deputies precisely one day after the Worker’s party (Rousseff’s party) rejected engaging in the defense of Eduardo Cunha, the president of the Chamber. Cunha is facing charges of money laundering and possession of millions of dollars in secret Swiss bank accounts. He was declared culprit but uses his influential position to maneuver and delay his own trial. After approval of the impeachment process, the Supreme Court has determined that Cunha be kept off his chair. Not only this came too late, but his influence on the Congress is such that some assert that the interim government is being directed by Cunha.

Evidences of corruption extend to members of the Senate and to at least seven ministers of the interim president Michel Temer, making the thesis that the impeachment was a necessary move in the direction of preserving the impunity very likely. Confirmation for that came recently. Phone and face-to-face conversations between the ex-president of a subsidiary company of Petrobras (Brazilian oil company) and members of the Senate were recorded back in March and just made public by the newspaper Folha de São Paulo. The dialogs give a robust indication that the impeachment process derived from a plot to oust President Rousseff in order to stop the anti-corruption “Car wash” operation, led by the Brazilian Federal Police. The recordings corroborate Brazil is facing a coup1. The incongruity of the new government includes the interim president himself. In what UK’s “The Guardian” recent called “the latest bizarre development” of Brazilian political crises, the now temporary president Michel Temer is forbidden of running for office for the next eight years because he violated campaign finance rules during the 2014 election2. Yet, he keeps intact and acts beyond his temporary status, applying a critical restructure to the government. For instance, important Ministries like Culture and Science and Technology were closed with the argument of costs reduction. The first was already reopened after intense protest by artists and the public. Also, severe cuts in government expenses with health and education were approved, while some segments of the public sector, including the Congress and the Judiciary, earned a raise in salary.

Considering the irregularities of the impeachment process and the announced tragedy of the vice president government, Brazilians only hope their democracy survives and their votes are honored in the elections of 2018.

André T. C. Dias is a biologist and Assistant Professor on Ecosystems Ecology at Universidade do Estado do Rio de Janeiro (UERJ). Clarice Salles Chacon is a lawyer and earned a master’s degree in Contemporary History at the Universidade Federal Fluminense (UFF). Luciana O. Araripe graduated in Biology and holds a research position studying the genetics of mosquito behavior at Fundação Oswaldo Cruz, in Rio de Janeiro.