Caracas: where there is so much to do and everything is possible 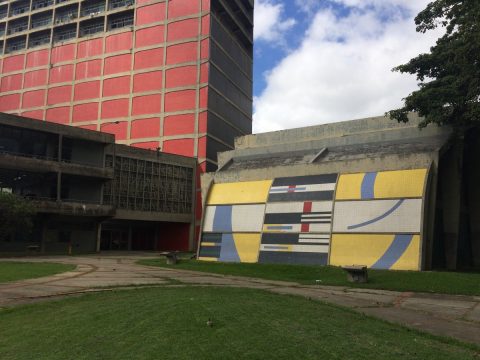 One of Jean de la Fontaine’s fables tells about an idle grasshopper and a diligent ant. When winter comes, the grasshopper starts to get hungry. Realizing the ant is fully prepared, having stored up food for months already, he begs for help. The ant however tells the grasshopper to dance the winter away instead. The fable is a bitter but precise metaphor of the current hard times Venezuela is facing. The Venezuelans dance indeed, yet with the little energy they still have.

It is Janine Castès de Vigas who tells me she used the metaphor to describe the country’s precarious situation years ago, probably not knowing that it would remain topical until today, and who knows how much longer. The French-Venezuelan widow of the artist Oswaldo Vigas (1923-2014) is one of the reasons of my stay in Caracas. I am asked to do research for a comprehensive publication about the art and life of Vigas, one of the most prominent modern artists in Venezuela, and the Vigas Foundation is based in the Venezuelan capital. Although I hardly have time to see more than the neighborhood I stay and work in, Los Palos Grandes (which I traverse by car only as walking is too dangerous) I am desperate to visit the city center. Thanks to the oil boom, dictator Marcos Peréz Jiménez (1914-2001) who was determined to modernize Venezuela’s capital, and a group of (visiting) architects, Caracas was an ultra modern city in the 1950s. “There is so much to do. Everything is possible”, Jorge Romero Gutiérrez (1924), one of the local architects, would have said back then. What is left of that context and attitude in the urban landscape today?

One morning I manage to visit the Museum of Contemporary Art, The Museum of Fine Arts and some of the art works in public space located in the city center. Especially the kinetic artists Jesús Soto (1923-2005) and Alejandro Otero (1921-1990) are well represented.

Furthermore I see the Theatre of Teresa Carreño and later that week University La Central, where murals and large sculptures of among others Jean Arp (1886-1966), Alexander Calder (1898-1976), Fernand Léger (1881-1955), Mateo Manaure (1926), Victor Vasarely (1906-1997) and Oswaldo Vigas must offer the students an incredible amount of extracurricular inspiration. I am totally astonished by the beauty and the grandeur of the architecture by architect Carlos Raúl Villanueva (1900-1975), whose most famous accomplishments are the design of the Museum of Fine Arts and University La Central. This is modern architecture to the max. Though lacking the sensual lines of the modern creations you find in Brazil, its imposing brutality and unexpected perspectives create a special kind of aesthetic, one that furthermore influences my sense of direction and human scale profoundly. Nevertheless it is clear that many buildings are dilapidated and in serious need of renovation. I see facades overgrown with plants and many art works in decay. To my dismay there are hardly resources to stop further downfall I am told repeatedly. Caracas is a city to experience in real life. The extreme depths and heights of the buildings cause the strangest spatial experiences and the colors of the concrete rhythms on a sunny day can’t possibly be transferred via photos. A lot is still to do in Caracas and I fervently hope the city is able to live through the dance, together with its habitants. Once Upon a Time in Venezuela: Drijvende gemeenschap zinkt steeds dieper weg