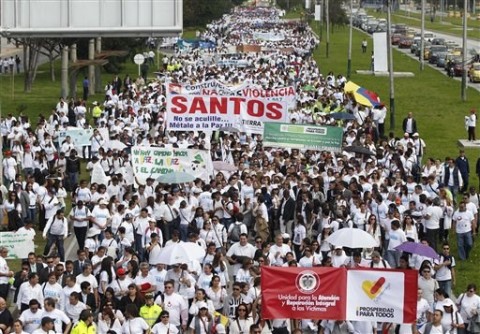 The 1997 movie ‘Wag the Dog’ is a must-see for anyone interested in politics and public opinion making. For those of you unfamiliar with the movie: its plot revolves around a Hollywood film producer’s attempt to stage a fake war between the US and Albania to distract the electorate’s attention from a sex scandal involving the president.

Winifred Ames: What have they done to us?

Brean: What have they done FOR us? What do you know about them?

Brean: See? They keep to themselves. Shifty. Untrustable.

Next to being very entertaining, the movie provides a nice illustration of spin doctors and their construction of public opinion. In the run-up to the April 9th ‘March for Peace’ here in Colombia, I’ve found myself thinking a lot about this movie.

April 9th is an important day in Colombia because it marks the 1948 assassination of presidential candidate Jorge Eliécer Gaitán. As someone said on the radio today, it was commonly felt that he was ‘the only person that could save Colombia’ from political unrest and conflict. Given that his upcoming presidency held such expectations for the public at large, his murder led to massive riots called the Bogotazo and gave rise to a period of political unrest known as La Violencia. This year, left-wing movement Marcha Patriótica organized a national march for peace and the victims of the internal armed conflict to commemorate the 65th anniversary of the occasion.

Enter Santos and the peace negotiations with the FARC in Havana. I imagine the President sitting in his office with his advisors – talking about ways in which to create momentum for the peace agreement. ‘But wait’, one of his staff members says, ‘why don’t we cooptate that march for peace next week? Nobody can oppose a march for peace!’ So the next day, Santos urges the entire country to show its support for peace and the victims of the conflict by joining him on the streets of Bogotá. And today, there he was indeed, captured on camera pushing a handicapped soldier in a wheelchair amidst hundreds of thousands of people dressed in white, shouting for peace. Public opinion making at its best! Former President Álvaro Uribe – Santos’s archenemy – feebly tried to shift the focus from peace to the alleged impunity for war crimes that would come with a peace agreement (according to my flatmate, a common saying is that ‘the only thing standing in the way of a peace agreement is Uribe’s twitter account’). The main left-wing opposition party put out a statement framing the event as nothing more than an attempt of Santos to ‘use the Colombian people’s desire for peace to prompt his own reelection.’ In the end, however, the march’s appeal became too big and many opposition politicians publicly announced that they would participate as well. Turns out that it is very difficult to oppose a march for peace indeed. The main question remains whether the negotiators will reach a peace agreement. I was skeptical at first, because my main point of reference for peace agreements is formed by the never-ending negotiation process between Israel and the Palestines. But when I started interviewing political elites here, I noticed that they all talk about what will happen when – rather than if – the peace agreement is reached. In addition, a common saying is that Santos has his eyes fixed on a Nobel Peace Prize and that he will therefore not rest until his government reaches an agreement. With masses of people on the street demanding peace – and an unlikely (and partially unwilling) coalition of government and opposition forces following his lead – he managed to gain a lot of leverage towards this end and portray himself as the nation’s great leader in the process. Clever, clever man!