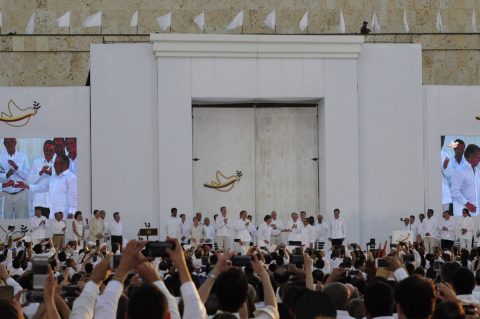 Why would a country vote against peace after over 50 years of war in which more than 200.000 people lost their lives and over six million were displaced? This question occupied all those interested in or somehow connected to Colombia over the last couple of days. Like them, having expected the victory for the ‘yes-camp’ that the polls predicted, I was strongly surprised with the vote against the peace process in Sunday’s referendum – even though ‘no’ won by less than a 1% difference. In reality, reminiscent of June’s Brexit results that equally shocked many, also in the case of Colombia some explanations can be identified that make the referendum results more understandable, though not less disappointing.

First of all, it is important to look at how the yes and no votes were divided. The referendum results point out that those who voted against the peace accords were mainly concentrated in the big cities, while those in the rural regions overwhelmingly voted in favor of peace. This demonstrates clearly that the way the conflict was experienced plays a role in the support for peace. Rural regions were hit hardest by the conflict – for example: 80% of displaced people are from rural areas – and will therefore also feel the effect of peace most strongly. Those affected by the conflict want it to be over and want to guarantee a life without insecurity and violence for themselves and the next generations, understanding that a legal and political compromise is needed after over 50 years of conflict. The big cities have been much less affected by the conflict, except for some notorious bomb attacks in past decades. The impact of the peace accord on the cities is of a more symbolic dimension, making the peace agreement less urgent.

Ex-president Uribe, fierce opponent of the peace accord, cleverly played into this relative disinterest in peace (showed also by a low turnout of not even 40% of the electorate, which could however also be impacted by bad weather conditions in parts of the country) with a strong campaign that focused on some contentious points of the peace accords. Uribe, whose right-wing political vision still receives widespread support among a large part of the population, considers that the FARC, who he describes as terrorists, are treated too leniently by the accord. Instead of the alternative restorative justice sentences, there can only be one option and that is jail for the FARC. The fact that the peace accord moreover promised the FARC seats in Congress was outrageous according to Uribe, just like the reintegration salary paid to demobilising FARC members and the gender perspective of the peace accord, which Uribe and other conservative voices claim to threaten ‘family values’ for taking LGTB rights into account.

Uribe’s private interests are hidden behind these public concerns, since his well-known link to the creation and crimes of paramilitary groups represents an inconvenient truth that will undoubtedly be further uncovered by the truth commission proposed by the peace accords. Moreover, the peace deal would mean a possible weakening of the power of the country’s traditional elite, and the solving of decades-long social conflicts – for example about land – to their disadvantage. Uribe skilfully managed to sell his simple message: I am not saying no to peace, but to this particular peace agreement. Funnily enough his reasoning received support from Human Rights Watch, which rejected the agreement for providing impunity for serious crimes. HRW’s strictly legalistic thinking however lost sight of the political and social context of the peace negotiations, in which a balance must be found between peace and justice in the absence of a clear victory for one of the parties after over half a century of conflict.

Both Uribe and HRW fall in the trap of black and white thinking: according to them the FARC are terrorists, failing to recognise that many of its members were recruited as children, or might have joined the FARC after having suffered violence themselves – as Uribe conveniently forgets that both the State’s armed forces and paramilitary groups are responsible for many serious crimes. Moreover, as the demobilisation process of the paramilitary groups and the recycling of many in BACRIM (criminal groups) and new paramilitary groups has shown, a way must be found to prevent armed groups from re-arming. This implies guaranteeing that demobilised, many of whom lost youth and educational and professional development opportunities as members of armed groups, are offered real opportunities to make a new start. A conflict as protracted as Colombia’s means that many people have been affected by conflict some way or another, and therefore more nuance is needed.

Nuance was precisely what was missing from the campaign for the referendum, both in the simple and incomplete messages of the no-campaign, but also in the government’s campaign. The yes camp has proved unsuccessful in explaining the nuances of the peace accord, and the reasons why some justice needs to be sacrificed for a lasting and sustainable peace. It seemed like the government, similarly to the Brexit-referendum, was confident of its victory, organising a hasty referendum in order to move on to the actual work of building peace. Yet since it has always stressed that the population will have the final say on peace, and given the strong support for Uribe and his allies, it is now impossible to put the results aside. Although both government and FARC pledged that they would not give up on peace, it is unclear until when the ceasefire – for now extended until the end of this month – will last. Uribe and other opponents will most likely join the negotiations, but it is uncertain what compromises are possible, making the future for peace in Colombia uncertain again.

But last Wednesday, thousands of predominantly young people took to the streets of Bogotá and other Colombia cities, demonstrating and demanding peace. The referendum results might also have sparked a passion for peace that can hopefully give a new impulse to the negotiations to find a new compromise, enabling a lasting peace.