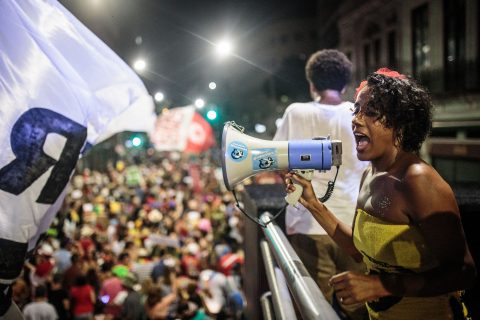 2017 was a year of uncountable retrogresses in all areas in Brazil. From A to Z, it is possible to cite examples of public policies, projects of laws, discourses and cancelled progressive agendas that plotted the scenario of a backwards, medieval terra brasilis[1]. Under the influence of predominantly conservative ideas (the caucus Cattle – Bible – Bullet[2]), the National Congress kept representing the utmost of Brazilian staggering politics. Brazilian congressman unearthed their bunch of conservative ideas, spread and manoeuvred their misleading arguments, and agitated the population towards an even more polarized country. With the discourse to step out of the all-sectors crisis, the debate in the Congress focused throughout the year in approving austerity measures through legal reforms that go backwards with the rights of workers and pensioners. Naturally, the hot potato (or the pineapple, as we would say in Brazil) has fallen in the lap of the poorer, the first to suffer with unemployment and hunger[3] and soon-to-be affected by these legal reforms if they are approved, while the government plans to forgive millions in the debts of entrepreneurs[4]. However, the cherry in the cake of 2017 only came later in the year with the voting of the Proposal of Amendment to the Constitution (PEC) 181-A/15, which brought an unexpected backlash against women’s rights.

The PEC 181-A/15 was also known as the Trojan’s horse PEC. Initially, the text of the proposal 181/15 limited its scope to changing Article 7, XVIII of Brazilian Constitution in order to enable a longer maternity leave in the case of premature birth. The current constitutional text guarantees the right of rural and urban workers to have a maternity leave “without any prejudice to employment and salary, with the duration of 120 days”[5]. The proposal would change the text only to add that the leave “will be extended, in the case of premature birth, to the amount of days of hospitalization of the premature baby, not exceeding 240 days”. However, the Rapporteur (Relator) of the Project Deputy Jorge Tadeu Mudalen (from Party DEM, representing the State of São Paulo) decided to offer a substitute text to the initial proposal, therefore creating PEC 181-A/2015 and introducing a new subject to the debate. Besides changing article 7, XVIII; Deputy Jorge Tadeu proposed a change to core texts of the Constitution, being them Article 1, III and Article 5, caput. Regarding Article 1, III, which provides that human dignity is one of the fundaments of the Republic, the Deputy proposed to further conceptualize this fundament in the text as “human dignity since the conception”. To Article 5, caput, a similar proposal was done. The new text of Article 5 would guarantee the right to life to all Brazilians and foreigners residing in the country “since the conception”.

In other words, the PEC 181-A/15 proposed a change to the concept of life and of the right to life in the most important Brazilian legal text. It did so without any previous open discussion about the matter in Brazilian society, notably without any consultation to or participation from the civil society, as the amendments to the Constitution were brought in the middle of a much less complex discussion regarding the undisputed extension of maternity leave. The impact would be huge in terms of impairing gender equality and women’s rights. If the changes were to become reality, abortion in any case would be considered a crime, regardless of situations of rape, malformation of the fetus or risk of life of the mother. In the case of malformation of the fetus, for example, a long discussion took place in the Supreme Court some years ago about the case of anencephaly of the fetus with the Proceedings of the ADPF (Arguição de Descumprimento de Preceito Fundamental) 54.  After a long debate in the society, with the participation of several groups as amicus curiae in the judicial proceedings, the Judges decided in 2012 to allow abortion for those cases, as obliging the mother to carry the baby could be compared to torture, as most of the babies with this medical condition either die during pregnancy, or a few minutes after birth.

The debate in the voting of PEC 181-A/15, which took place in November, geared towards the approval of the proposal by the majority of the male deputies, while the discussions touched fundamental issues in terms of gender theory and equality. While the conservative deputies defended that the arguments against the proposal were based in “Gender Ideology”, the deputies against the PEC remarked how the proposal reflected  the idea of those who think they “own women’s bodies” (Deputy Erika Kokay – PT-DF[6]). The Rapporteur Deputy Jorge Tadeu even expressed that “if he would vote with the religion, he would be very well representing his people”[7]. The debate provoked the manifestation of several sectors of the society, and some important institutions took action against the Proposal. The Federal Public Defendants, for example, filed a technical note to the President of the Lower House (Câmara dos Deputados) on 13 of November remarking the importance to end the culture of violence against women, and that the Proposal of the PEC 181-A/15 would abolish rights guaranteed and consolidated in more than 70 years. UN women, UNFPA, OPAS/WHO and ACNUD also published a note highlighting their concern with the approval of the PEC on 20 of November[8]. And the debate went to the streets, with thousands of women marching against the PEC 181/15 in what became a great movement towards women rights and feminism. In the main capitals of Brazil, women occupied the streets with signs reminding those male deputies of laicity, women’s choices and empowerment, of the rule of law, democracy, shouting together “we will not have children of rapists” (“não teremos filhos de estupradores”).

The first voting of the Report of the PEC 181-A/15, in which 18 male deputies voted in favour, and 1 against, from a woman (Deputy Erika Kokay), proved the capacity of the Conservative Congressman to manoeuvre legislative proposals in insidious ways, using the argument of “representing their people” in order to legitimate unfunded propositions and disrespect the legislative proceedings or their inability to open the debates to the broad and diverse Brazilian society. They also had supporters going to the streets, although in much less quantity, shouting that “existence has to be respected, or there will be resistance”[9]. In one episode, these supporters, carrying crosses, even burned the picture of the philosopher Judith Butler put into a doll, and called gender theory a “pernicious ideology”[10]. Judith Butler was attending a seminar in Brazil on 7 of November in the city of São Paulo. Although it is difficult that the Proposal will Pass, as it will still need a special commission for examination, besides the approval of 2/3 of the Congress, the debate will continue in 2018. May all the spotlights turn to it; thanks already to the power of thousands of women marching in the streets and shouting that this is unacceptable, that women will not admit to be twice-victimized subjects in the legal texts. As Judith Butler said herself in her visit to Brazil, the reactionary sexual politics are making an effort “to take us back to a world that will never come back”[11].

[1] In the maps of the 16th Century, Brazilian territory was mentioned as terra brasilis.

[3] See, e.g. article from the Guardian “’People are getting poorer’: hunger and homelessness as Brazil crisis deepens” at https://www.theguardian.com/global-development/2017/jul/19/people-getting-poorer-hunger-homelessness-brazil-crisis

[8] The note is available here: http://www.onumulheres.org.br/noticias/nota-do-unfpa-onu-mulheres-opasoms-e-acnudh-sobre-a-pec-18115/

[10] See, e.g. video and article from Uol Notícias at https://noticias.uol.com.br/cotidiano/ultimas-noticias/2017/11/07/manifestantes-protestam-contra-filosofa-americana-judith-butler-em-sao-paulo.htm