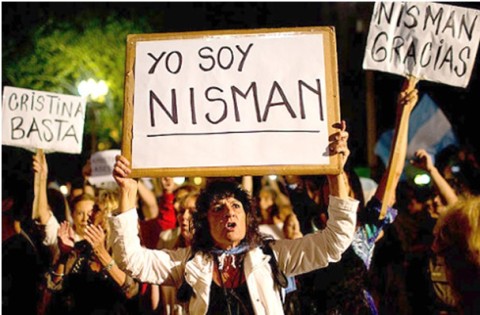 “I Might Die Because of This”: Structural Impunity and the Death of Alberto Nisman

On January 14th 2015, Argentine prosecutor Alberto Nisman announced he was about to reveal a report containing details on the 1994 bombing of a Jewish cultural centre in Buenos Aires. In said report, Nisman accused President Kirchner and her former Minister of Foreign Affairs of covering up Iranian involvement in the attack. Four days later, Alberto Nisman was found dead in his apartment with a gunshot wound to the head. There is currently much debate going on about the prosecutor’s mysterious death.  Because of the allegations he made towards President Kirchner, many fingers pointed towards her at first. The President, however, maintains that Nisman’s death was part of a plot by the Argentinian intelligence agency, aimed at destabilizing her government. Whether it was the government, the intelligence agency, or a forced suicide, we do not know.

But that is just the thing: why do we not know? How can it be that the responsibility for the 1994 bombings was never properly investigated, and that more than twenty years later a prosecutor who did investigate it turns up dead the night before he was supposed to testify against the President, and that whoever bears the responsibility for this will probably also remain unpunished? Whatever has exactly happened, this series of events reveals serious flaws in the Argentinian political system. It is not just an unfortunate and coincidental series of events. As Davis (2010) argues in her seminal work on fragmented sovereignty in the developing world, violence in Argentina, just as in many Latin American countries, is institutionalized in the political system, which leads to fragmented sovereignty, public insecurity and structural impunity, and it is within this framework that the events must be interpreted.

In a recent essay on impunity, Tokatlian (2015) argues that violence in Latin American countries is so entrenched in both institutions and in daily life, that, even though Argentina has made significant progress towards a stable democratic political system, the government’s legitimacy continues to be threatened. Non-state armed and sometimes transnational actors are threatening the state’s sovereignty by engaging in coercion and capital accumulation themselves (Davis 2010). According to Tokatlian, the intelligence agency is taking on a life of its own, being infiltrated by foreign counterparts and operating in a mafia-style. The judiciary is deeply influenced by social, economic and political interests and therefore has lost part of its objectivity, which causes impunity to be the standard rather than an exception. The government’s internal sovereignty is fragmented and it does not have full control over what is going on inside its borders.

This is the context in which the events, from the 1994 bombings to the death of Alberto Nisman, took place. The fact that the responsibility for the 1994 bombings was never properly investigated and that the Iranian officials involved in the attack were never prosecuted is a clear example of the impunity caused by the failing judiciary and the polarized government. With the death of Alberto Nisman, the issue of impunity rises once again. While there still is suspicion that the government was involved, the President blames the intelligence agency. In the meantime, the judiciary is not strong and legitimate enough to investigate the event objectively. Given the circumstances, impunity persists, which in turn creates a society of cynicism and constant fear (Davis 2010). According to Nisman’s aide Diego Lagomarsino, Nisman feared for his and his family’s life because of the allegations he had made towards the President, which is why Lagomarsino had lent him a gun to protect himself. Horribly ironically, this gun that was supposed to protect him was the gun that killed him. The day before Nisman was killed, he had actually said: ‘I might die because of this’. Turns out, he was right.

What we should conclude from this, is that Alberto Nisman’s death was not an unfortunate coincidence, or a one-time isolated event. Rather, it is the embodiment of the deep and structural problems within the Argentinian political system, that is a lack of internal sovereignty and structural impunity. These problems, however, are not unique to Argentina. Rather, as noted by Davis, many countries in the Latin American region face a situation in which institutionalized violence leads to a fragmented state and impunity. In order to actually make stable democratic systems work, these underlying problems of institutionalized violence and structural impunity have to be addressed.