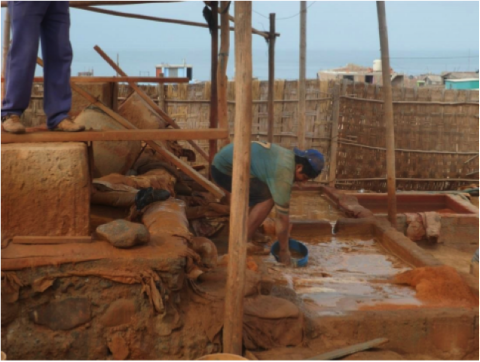 In Peru, a lot of money is earned through illegal mining. The illegal mining sector extracts between $500 million and $3 billion worth of gold annually. Therefore, a lot of powerful interests are at stake when dealing with illegal mining. Corporate social responsibility organizations try to create consciousness among the international buyers of this gold about the unethical character of illegally mined gold. But as long as there is a demand for the gold extracted out of these large-scale illegal mines, the financial influence on the government of the mines stays intact. In their book Societies of fear: The legacy of civil war, violence and terror in Latin America, Koonings and Kruijt (1999) introduce the theory that poverty, informality and social exclusion hinder state formation and causes an erosion of the legitimacy of the state machinery in three related manners. Firstly, the informal sector operates outside of the boundaries established by the law. Secondly, the informal sector seeks to obtain political influence through use of its resources to maintain the status quo. Thirdly, the informal sector often possesses private armed groups to ensure security for its operations. In effect, the informal sector thus creates its own institutions and forms and enforces its own rule of law. I argue that these developments are visible in the Peruvian illegal mining sector as well and that illegal mining thereby threatens effective governance.

In 2013, the US labor rights non-governmental organization Verite, published a report on the labor conditions within illegal mines. Informal mines deploy 500,000 people both directly and indirectly. The conditions of the employees, mostly poor people who are often unpaid, are similar to slavery. Abduction, forced-labor, dangerous conditions, exhaustion, diseases, rape, child-labor and other human rights violations are common practice. Most employees die before the age of 40. Health, safety and environmental regulations of the formal sector do not apply to these jobs, as the Peruvian state has no control over this informal industry. The lack of rule of law and the inability (or unwillingness) of the state to address these human rights violations cause civilians to lose their trust in the effectiveness of the Peruvian government.

This is related to a second development, namely that many of the regions where illegal mining takes place, are not under the control of the government. The mines are guarded by heavily armed men, paid out of the enormous profits to be made in illegal mining. These regions remain lawless and the government is unable to take any action. With no state presence in these areas, the employees are left to the hands of the owners of the illegal mines. Because of these practices, the state loses its monopoly over violence and performance of the rule of law within its territory. The state can no longer guarantee the safety of its civilians in areas where the control over public security is now in the hands of other actors. These developments pose a serious challenge for the Peruvian government. It undermines Peru’s capacity to enforce the rule of law and means a loss of potential state revenues.

One of the biggest problems in tackling illegal mining is government corruption. The Peruvian government has tried to formalize illegal mining. However, corruption among state officials, both on national and local level, has hindered this process. One example of this influence is the recent accusation that President Ollanta Humala of Peru accepted over $1 million from the illegal mining industry for his 2011 election campaign of 2011. Such accusations harm the legitimacy of the government – especially in the eyes of those citizens whose rights are violated by illegal miners. Moreover, there is a lack of political willingness, apart from the ministry of labor who is indeed committed to achieve change, and a lack of financial sources that is needed to combat illegal mining. Buying of officials and the possible sponsoring of campaigns, gives the large-scale illegal mines a direct, unwanted influence on the political decision-process. Therefore, the autonomy of the state in making decisions erodes.

To conclude, Peru is an explicit example of how an informal sector challenges the effective power of the government. Illegal mining is good for a lot of money and therefore has a lot of political influence. Through corruption, the owners of the illegal mines manipulate the government’s decision-making power. Parts of Peru are not under the control of the Peruvian government but are in the hands of the large-scale illegal mining operations. The working conditions of workers are close to slavery. These facts cause an erosion of the enforcement of the rule of law by the government and a decline of citizen trust in the effectiveness of governance. To counter these developments, the Peruvian government should put illegal mining high on its political agenda and come up with an effective action plan to end these practices.