Life under Pinochet: A cunning devil 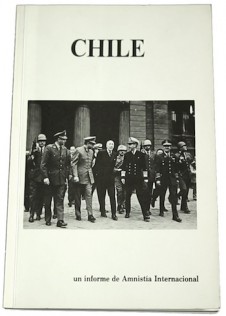 After the 1973 coup in Chile, Ambassador Frode Nilsen dined with the military dictatorship’s highest-ranking officers. Behind their backs he smuggled dissidents to Norway.

Oslo, Norway, 25 June 2013: It is one of those moments when time seems to stop. A meeting between two men whose lives crossed dramatically almost four decades ago.
“You helped me escape from Chile,” says Victor Hormazabal, 67, softly shaking Frode Nilsen’s hand.

The former diplomat, now almost 90 years old, fights back tears as he realizes Victor is one of the hundreds he helped escape General Augusto Pinochet’s torturers and executioners after the 1973 coup.

Known for his keen interest in each individual he helped, Frode is visibly troubled by the fact that he no longer remembers Victor’s particular case.

But Victor remembers. Every detail of how Frode played a key role in saving his life.

Valdivia, Chile, November 1973: ‍ What do you know about the weapons,” asks an angry voice. From behind his blindfold, Victor recognizes his torturer. It is the Lieutenant who first interrogated him when he was arrested weeks ago. He empties six bullets from his revolver onto the table, puts one back and points the muzzle at Victor’s head.

“Where are the guns”, he asks again. “I don’t know”, Victor says. The 27 year-old chemist, a member of the Socialist Party and head of the local Hospital Workers Union branch, has no knowledge of alleged plans to kidnap the family members of military personnel, as leverage to access weapons and stage a counter coup.

“At first you are scared. Then you only think of survival. You reach a level where the body can take anything,” says Victor. He still has faint marks on his forehead where his torturers placed the electrodes.

Oslo, September 1973: “The Chileans are celebrating the coup like Norwegians celebrated 8 May 1945 [the day the Nazi occupation of Norway ended]”, reports the then Norwegian Ambassador to Chile, August Fleischer. He is relieved that heating oil is again available in the capital, Santiago.

Norwegian Prime Minister Trygve Bratteli, is furious. While other embassies have opened their doors to refugees, Fleischer refuses. The situation is embarrassing for the Labour Government.

Seasoned diplomat Frode Nilsen is despatched to Chile as a special Asylum Envoy, instructed to assist politically persecuted people. Having spent three years in General Fransisco Franco’s Spain, he speaks Spanish and has assisted dissidents before.

“I was given wide latitude,” recalls Frode, suggesting that he defied most diplomatic codes to get the job done. “I had our Minister of Foreign Affairs on my side, but I was careful not to risk deportation. If I had to leave the country, I could help no one. So I made sure I got to know the right people, those who made the decisions, ” he explains.

He even dined with General Augusto Pinochet and his wife, Lucía Hiriart. During dinner he had the nerve to ask Pinochet directly to help him with a case. “Later, at a diplomatic function, Pinochet waved me over and said to those standing beside him: ‘Gentlemen, this is the man who wants to save the world’.”

“When my father talks to people, you feel he is there, just for you. You feel important. This is why people listened to him, how he got leverage with people in power”, says his daughter, Randi Elisabeth Nilsen.

“Each individual has value. This you should never forget,” says Frode. “I was a cunning devil,‍ he laughs.

Between November 1973 and September 1974, he had a quota of 100 refugees cleared to go to Norway. He thoroughly investigated each case brought to his attention by a network of contacts. “I chose those who needed our assistance the most,” explains Frode.

Through a combination of distracting and befriending the military guards at the embassy gates, he smuggled people in and out. Sometimes it was as simple as a car passing slowly enough through the embassy gates to allow people hiding outside to crouch down and run past it right under the guards’ noses, quietly making it to safety.

‍ My First Secretary was a mean back alley driver,” says Frode, explaining how they then got dissidents to the airport and onto Scandinavian Airlines flights bound for Oslo.

In 1975, Frode Nilsen returned to Chile as Ambassador, a post he also held from 1988-1992. He could then take advantage of a decree stating that selected political prisoners could be released if they secured a visa to another country.

Santiago Prison, 1975: “Some Norwegian friends of yours are really bugging me to get you out”, says the formal, impeccably dressed man sitting in front of Victor. “I don’t know anyone in Norway?⍊ His mind is racing. Who is this Frode Nilsen who says he can help release him from prison? Where at times he has been forced to drink water from toilets and eat mouldy bread left behind in cells?

Victor ’s “friends” were Oslo-based Amnesty group 6, which adopted him as “their” prisoner of conscience. The Bishop of Valdivia then received a letter asking if he could do something to save Victor from death row. After seven weeks’ anxious wait, his death sentence was commuted to life imprisonment and he could finally sleep again.

“I was sceptical, but I decided to trust Frode. He came across as sincerely interested in my case,” recalls Victor.

Twice, Pinochet rejected his request for a travel permit. Later, Victor was told that Mónica Madariaga – Chile’s then Minister of Justice, Pinochet’s cousin and the author of the infamous 1978 Amnesty Law that still protects many of the regime’s supporters from persecution ⍊ slipped his request in between a pile of letters, which Pinochet signed without closer scrutiny.

Frode confirms that Mónica Madariaga was one of his most valuable contacts. “I managed to convince her to help me,” he says. “The support I got from Amnesty was also invaluable. When I negotiated, it helped if my request was supported by Amnesty.”

In March 1977, Victor Hormazabal landed in Oslo. In his pocket he had the names of his Norwegian supporters, among them the leader of the Ljan Amnesty group in Oslo, Carl Halse. He helped Victor get a job at The Norwegian School of Veterinary Science, where he worked until he retired recently. He remains an active member of Amnesty Norway.

Oslo, 1982: Victor can’t believe his eyes. The letter says that Ramona Albornoz de Carril, “his” prisoner of conscience from Argentina, has been released. His local Amnesty group has campaigned for years to free her. It feels good to give something back.