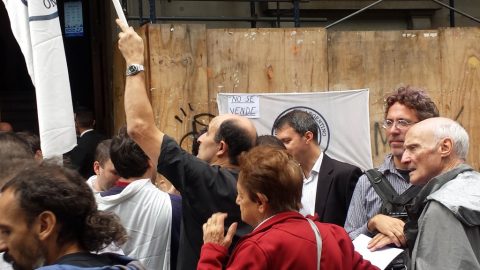 Letty Reimerink’s research aims to give insight into the social movements and other parties engaged in defending public spaces in Buenos Aires.

With only 1,8 m2 of green space Buenos Aires ranks among the lowest in the world and is far from the minimum of 10-15 m2 per capita which the World Health Organization suggests. While academics stress the health benefits of green spaces and the importance of public spaces as places of casual encounter for sustainable urban life, public spaces in Buenos Aires are constantly threatened by privatization by the city government.

Entrance to public parks is restricted by gates and parts of parks are being sacrificed for private enterprises. One example is the ‘ley de bares’ of 2014 which permits installation of private cafés in parks. Neighbors are organizing themselves in protest.

Through in-depth interviews with neighborhood activists, NGO’s, journalist, politicians and people working within the city ministry of ‘Ambiente y Espacio Publico’, combined with observations in public space I am analyzing these battles and  the network of organizations involved in what is slowly turning into a city wide protest against privatization of public space.

Below a few fragments of Letty’s field notes.

It has been a rather turbulent week in the streets of Buenos Aires. On Monday I found myself stuck on Avenida Callao in a demonstration of thousands of people defending public education. On Thursday hundreds of adversaries of the Macrí government used the revelations in the Panama Papers, in which Macrí’s off-shore firms came to light, to demonstrate on Plaza de Mayo against his policies and demand his resignation. But the most noteworthy was a rather small demonstration that took place on Thursday morning in front of the legislature building on Peru.

This morning the vote is scheduled to approve the establishment of the cities Agencia de Bienes SE (Property Agency) which is meant to function as the new official owner of the land and buildings that are part of the city’s heritage. The idea is to sell off parts of the property through this agency to real estate developers. This plan is the idea of mayor Larreta’s PRO party who advocates privatizations of public spaces.

At 10 AM a small group of people gathered in front of the legislature building. Within less than an hour the group had grown to about 60 people. A real mixed crowd consisting of youngsters with Rasta hair, middle aged men in suits and pensioners, and everything in between. They represent various civil movements in the city from the Observatorio del Derecho a la Ciudad (Observatory of the Right to the City) to local neighborhood groups fighting for the protection of public space.
The atmosphere  was cheerful and intimate, like a family reunion. Everybody knew each other and people were chatting in small groups. They put up two banners next to the entrance of the building and an older woman stood with a piece of paper close to her chest which said: ‘Buenos Aires no se vende” (Buenos Aires is not for sale), the slogan of this campaign. Yet, she looked as though she didn’t really belief in a positive outcome anymore.

If it wasn’t for various neighborhood organizations defending public spaces the city would be even more grey.  One of the oldest ones, Amigos del Lago, celebrated its 25th anniversary last year. Amigos del Lago is a neighborhood association protecting Argentina’s oldest, biggest and most well-known park, Parque 3 de Febrero, bordering the wealthier neighborhoods of Palermo and Belgrano. Architect Osvaldo Guerrica Echevarria is one of the founding members and one of two who is still active. “It’s a heroic act and kind of a miracle that we are still here after 26 years”, he says with a smile. Fact is that most neighborhood organizations are established to achieve a specific goal and after that, they collapse again. Amigos del Lago has engaged in an ongoing fight to protect the park, which has been under constant attack since its inauguration 140 years ago. “For 26 years city governments have been selling public spaces to their friends, whether these are companies or private people”, Osvaldo states. “They use public spaces like they belong to them. They give out concessions, sell them or even give them away for free. This has been going on for years, regardless of the political color of the government.” The rose garden is one of the most visited parts of the park.

The fight of the Amigos del Lago is mostly a legal one. “The government is not obeying their own laws”, says Osvaldo. The association is constantly pressuring them by sending emails to politicians and working together with some of the delegates to propose changes in the law. “We have been able to win back more than 117.000 m2 (almost 12 hectares) and have prevented another 57 hectares from being taken away from the park”, states Osvaldo proudly. Among the areas that have been reconquered are a tennis club, parking spaces and parts of the former Olympic Park.

The movement was at its peak around 2005/2006. During that period they worked together with a national environmentalist movement and organized a huge national protest. “In those days, all the major newspapers knew us”, remembers Osvaldo. “Nowadays it’s much more difficult to get media coverage, because most media are government-oriented.”

However, the fight must go on to protect the green areas and Osvaldo is  tenacious, but there is also some frustration in his voice when he says: “This government doesn’t care one bit about green spaces. They don’t know what they are doing and they don’t listen.”

This article fits in our new section ‘Fieldnotes’, in which students and researchers share a passage or memo of their field work, contextualizing the problems investigated. Are you interested in sharing your notes? Do not hesitate to contact us at info[at]consentido.nl.