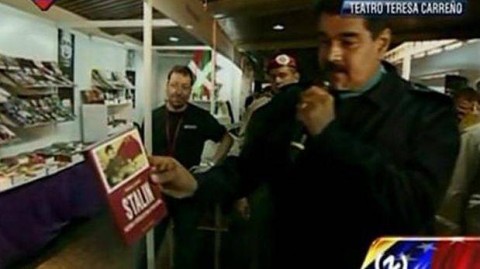 March has been an exciting month for the Latin American region: rapprochement between the United States and Cuba continues, tensions between the United States and Venezuela are heightening, Brazil deals with the political fall-out of the Petrobras corruption scandal, and El Salvadorian citizens went to the voting booths. In this blog, I present you with a short summary of these events, as well as some of the strangest, funniest, and most heart-breaking stories I came across in the media this month.

Over the last couple of months, Cuba and the United States have been trying to reestablish diplomatic ties. One important problem that stands in the way is that Cuba still appears on the US list of countries that sponsor terrorism (together with Iran, Sudan and Syria). Although stating that Cuba has a ‘history of supporting revolutionary movements in Spanish speaking countries and Africa’ is somewhat outdated, removing Cuba from the list may take some time. Until the US Congress – not particularly known for its rapid decision-making – supports a review of Cuba’s status, it is impossible for Cubans to conduct banking and other business transactions in the US. Which is not helpful if you need to travel to Washington to conduct negotiations with the US government… Nevertheless, political analyst Greg Weeks argues that politics rather than hard facts determine whether a country remains on the list, so Cuba will likely be removed in the near future.

A second hurdle to the rapprochement occurred in mid-March. News outlets reported that the negotiations had come to an abrupt halt, allegedly because Cuba sided with Venezuela in this latter country’s opposition to US sanctions (which I will discuss below in more detail). Nevertheless, at the time of writing, US and Cuban public officials held a first formal talk on human rights so this hump was likely just a bout of symbolic diplomacy.

Also, in a follow-up to last month’s discussion about how the diplomatic negotiations may affect ordinary Cubans’ access to Internet (and Netflix), the BBC announces that Cuba has approved its first public wifi hub in Havana. In addition, a direct phone link has been established between Cuba and the United States. Which just goes to show that pequeñas noticias may reveal so much more about what is going on in politics than that formal negotiations do!

I am always a bit hesitant to write about the Mexican government capturing yet another drug kingpin. They seem to do so every month, and yet the drug war never gets any closer to a resolution. As several of my students will discuss on conSentido this month, part of the reason for this is that the focus on such ‘high value targets’ fails to address underlying criminal structures and merely creates a power vacuum that often leads to a violent tug of war. So although Mexican authorities captured La Tuta, leader of the Knights Templar, as well as Zeta-leader Z-42 this month, I do not think this really improves the security situation on the ground. InsightCrime agrees with me and provides a good analysis of the way this power vacuum currently affects the Michoacan state here and here.

The only good thing that may come out of all this violence, something that I discussed last month as well, is that civil society is increasingly turning towards social media to unite and demand change. Examples this month are the #MexicoWantsAristeguiBack campaign in response to the firing of an investigative journalist and the #YaMeCansé, Por Eso Propongo campaign that allows citizens to contribute to an agenda for change. Civil society is not the only actor campaigning for change, however. In an ironic twist of events, InsightCrime reports how several imprisoned drug lords have signed a petition against human rights abuses in prisons.

On to Bolivia for some exciting news. The following picture shows the traditional and modern world coming together. These nifty devices are plugs for children with heart defects that are knitted by Bolivian women. According to the BBC, these devices are difficult to create mechanically and safe lives. Go Bolivia! Back to drugs. You may have heard that a shift has started to take place in the Latin American debate on how to best deal with the drug (trafficking) problem. Uruguay’s efforts to legalize marihuana stand out as the best example, but Jamaica recently followed suit as well. One organization that is not happy with this development is the UN drug control (UNODC). Last month, UNODC’s board scolded Latin America for its reforms and the accompanying shift in discourse. Uruguayan President Vasquez was not impressed and stated that Uruguay plans to start marijuana sales out of pharmacies later this year. Other Latin American countries retaliated by lobbying for global drug policy reform – away from the current policy of criminalization – during the UNODC’s 58th session on the Commission on Narcotic Drugs. The tide is definitely changing!

Ever since Obama imposed new sanctions on top-ranking Venezuelan officials, Maduro’s diplomatic machinery has been working on top speed to come up with effective and innovative countermeasures. Just to name a few, Maduro started using the #ObamaYankeeGoHome hashtag, called for a defensive military exercise, sent an open letter to the New York Times stating that Venezuela does not pose a security threat to the US, and adopted other diplomatic sanctions that will only end up hurting Venezuela. At the same time, Maduro has also been getting some work done at home, as he successfully asked the National Assembly to grant him with extra decree powers to counter this foreign threat. In addition, Maduro found the time to attend the release of a book on Stalin, where he uttered the unforgettable words: “Look, Stalin looks just like me, he even has the same mustache.” Despite all this hard work, Maduro’s approval rate recently dropped to a mere 22%. El Salvador held legislative elections this month. The proceedings were messy, to say the least, as the Electoral Tribunal failed to publish any preliminary election results. In the end, it took more than two weeks before the Tribunal managed to declare a win for the Conservative ARENA party. According to political analyst Boz, this development severely harmed the Tribunal’s reputation. More importantly, perhaps, statements from El Salvador’s largest street gangs overshadowed the elections. In yet another attempt at seeking to gain political leverage, the gangs indicated that they wielded sufficient power to influence the outcome of elections. At the same time, the gangs announced they would adopt a new true – with no government involvement this time round – to underline that it is the gangs rather than the government that safeguards the country’s public order. Sadly enough, reality shows that they may well be correct in asserting this, as homicides have gone up since the gang truce fell apart.

Ethical debates continue to roar in Chile. This month, news reports focused on a 14-year old, terminally ill, girl who requested the President to allow her to end her life. The President did come to visit her in the hospital but declared that she could not grant the girl her wish. Days later, a sick woman was arrested in a hospital on suspicion’s of having ended her pregnancy. The arrest put extra fuel on the current discussions in Congress on whether to change Chile’s total ban on abortion. These events follow a large march through the capital, in which women demanded legislators to adopt such a change. On a related note, El Salvador released a woman who had served time behind bars for over a decade. She miscarried when she was 18 years old but was sentenced to jail for 30 years as doctors suspected that the miscarriage had been self-inflicted. Her case does not stand on its own, as she forms part of a group called ‘las 17’: the 17 women that were convicted between 1999 and 2011 for more than 40 years in prison on similar charges.

Three completely unrelated Colombian news items stood out this month. First, some progress seems to have been made in the Havana peace talks as the military joined the peace talks for the first time since these talks started. In addition, the government suspended its FARC bombings. So far, so good.

Meanwhile, back in Colombia, the government has embarked on a massive manhunt to capture a leader of a major crime syndicate called Otoniel. This news is not particularly relevant were it not for the fact that the police trained one of Otoniel’s own dogs to track him down, which I find rather cool, and for the fact that the BBC reports that Otoniel’s girlfriend runs the financial side of his operation, which I find rather emancipating! So emancipating that I think she merits a picture in this blog: One final random piece of Colombian news: an event for International Women’s Day that included … strippers aroused controversy in the town of Anzoategui. Most women that attended the event with their children did not approve of the naked men on stage.

Moving on to a somewhat larger controversy, (conservative) Brazilians took to the street to protest the Petrobras bribery case and to call for Rouseff’s impeachment. Although opinion polls show that these developments give Dilma cause to worry, political analyst Boz points out that these protests do not resonate in the rest of society to the extent that they did in 2013. So far, public disapproval seems rather concentrated in specific segments of society.