The Latin American State has Faded Away: Time to Take Paramilitary Groups Seriously 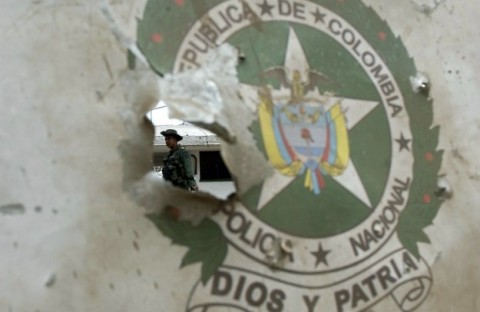 On October 2015, The Guardian reported that a Colombian Trade union activist named Gilberto Torres was kidnapped and tortured by a paramilitary group, apparently connected to the security arm of Ocensa: a joint venture company transporting BP’s oil. Torres recalled how he had helped organize a strike in December 2001, in protest at the murder of fellow Trade Union activist Aury Sara. Three months later, he was kidnapped. Torres, now released, said that his lawyers have information that at that time, BP was in charge of security arrangements. Torres claims that paramilitaries “came to protect the pipeline and the interests of the multinationals”. Another case: in March 2007 a US Banana firm was suspected of paying right-wing paramilitaries and leftist rebels, that the US government deems terrorist groups, for its protection in a very volatile farming region of Colombia. Payments to these paramilitary groups were made for the protection of the US Banana firm’s employees. Why shouldn’t these cases surprise us? Multinationals dealing with paramilitary groups in states with so-called ‘fragmented sovereignty’ can result in undesirable situations…

Charles Tilly (1985) claims that interstate violence formed the modern sovereign state. To wage and win wars the state created new institutions, had to collect revenues (taxes), and had to give its population citizenship rights for securing its legitimacy. When this was the case, the state was allowed to extract funds from its citizens and to employ armed actors. Here for, the sovereignty of the modern state rests on the assumption that it has a monopoly on coercion. The case of Gilberto Torres in Colombia shows us that the Latin American state is not a sovereign state, but is more fragmented. This fragmented state does not have complete control over its territory; it does not have the monopoly on the use of violence; and as the BP-case shows us, there are alternatives actors that fill this vacuum. These alternative actors also engage in struggles to wield coercive capacity and accumulate capital: the so-called paramilitary groups. But aren’t companies maintaining this undesirable situation by actively investing in paramilitary groups in these areas?

Paramilitary groups challenge the national-state forms of sovereignty. They use random as well as targeted violence, and show capacities to marshal weapons and other coercive means that can parallel if not exceed or undermine those available to the nation-state (Davis, 2010). With the diminishing trust in the coercive apparatus and its administration of justice system, governments lose their legitimacy. Citizens are challenged to take matters into their own hands, mostly by hiring private security actors (Davis, 2010, p. 398). This may signal the rise of new networks of loyalties to non-state armed actors forming new imagined communities of allegiance and alternative networks of commitment or coercion that territorialy crosscut old allegiances to a sovereign national state. These allegiances to paramilitary groups by companies and citizen thus reinforce the undermining of the state’s authority.

Therefore, it’s no surprise companies have to deal with local alternative networks of commitment, power, authority and even self-governance, like paramilitary groups, for their protection. In a statement the US Banana firm chief executive Fernando Aguirre, said: “The payments made by the company were always motivated by our good faith concern for the safety of our employees”. In the areas we talk about, you simply cannot deal with the state authorities, because they’re not present, and if they’re present, they most likely outsource their contracts to pro-government paramilitary groups. At the same time, the BP-case also illustrates the risk of human right violations in cases where companies deal with paramilitary groups.