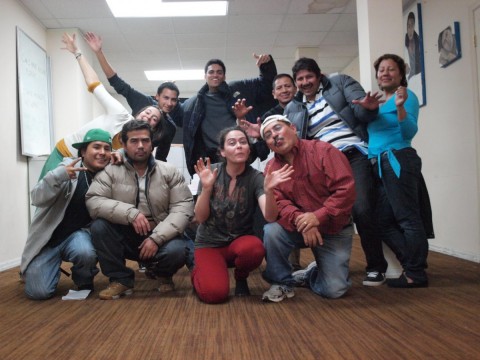 In the Pastoral Migratorio refugee help centre in Ibarra, northern Ecuador, a Colombian refugee  sat on a bench in the sun with her three children. The boy played in the mud; the other two slept on top of her. She appeared exhausted as she waited in line for legal support in housing. She was  worried that they might not get it. They were still waiting for their refugee status to be accepted; if  it was not, they were going to be asked to return to Ipiales, where they had fled from. She looked at me,  estranged. “Theatre?” she asked. “You came all the way here, to do theatre? And what good is that to me?”

My journey begins here. When I tell people that I am a theatre facilitator for displaced communities, I am usually faced with confusion as to how that helps those in need. So I’m going to write about Ecuador and my work with Colombian refugees, about Miguel, and DJ, and New York, its community of hispanic undocumented immigrants, and everyone in between, in the hope that I can answer her question.

I was born to Hungarian parents, brought up in France, trained as a social theatre practitioner in the UK, US and Cuba. Brought up in different countries and languages, I am keen to find an active role in supporting communities in dislocation. My tool is play. I use my skills as a clown doctor and a theatre professional to explore issues of belonging, uncertainty and risk-taking inherent in displacement.

In Ecuador, in the north-west border region of Imbabura, I worked independently in various areas with nationals and Colombian refugees to promote integration.

I knocked on doors, cold-called insitutions and organisations to find participants. In the morning, I performed magic tricks on the street and in schools to hook people’s attention. When I had a big enough crowd, I would announce my workshops and invite people to join me.

I worked in various contexts, such as a prison, a community center, a school and through the international human rights agency UNHCR. Some of the Colombians I worked with had recently arrived, others were still waiting for their papers. Some had been involved in narcotic warfare, others were not. Everyone felt the effects of regular violence in the area.

It was a difficult challenge for me, both professionaly and emotionally.
The incarcerated men recreated particularly violent scenes. One group had been formed thanks to Miguel, an enthusiastic sixteen year-old community leader. His cousin and brother had been brutally murdered shortly before the workshops started. Soon after, Miguel also received death threats, and the group fell apart.

Despite the difficulties, there were some moments when it all made sense. One group of teenagers was particularly resistent, sitting with their arms crossed and jeering at each other. A boy called DJ was proving difficult and rebellious but also influential in the group. I gave him the responsibility of sculpting a group ‘picture’. The theme was identity in their neighbourhood, one of the roughest in Ibarra. He thought for a second, threw himself on the floor face down and ordered everyone, one by one, to lie on top of him. This sparked the participants’ curiosity, and to my amazement, they all became involved.

He asked me to lie down next to him and look at them. Intrigued by the picture, I asked DJ to give it a title – he answered ‘Chancho al Horno’ (Pig in the Oven).

The name stuck – even after I left Ecuador, the group continued under that name, leading creative, projects promoting integration across the country, even after DJ’s status as a refugee was refused and he was forced to return to Colombia where his life was at risk.

Communities across the continent were struggling with similar dangers.

In New York City, I worked alongside individuals who’d found the strength to tackle, head on, paperwork with words like ‘Deferred Action for Childhood Arrivals’, I-82ID, ‘Voluntary Deportation Order’, I-765 WS, in the hope that after months or years, they and their families could start building a new life without fear.

That was during the day. In the evenings, I began giving theatre workshops to boost language learning, confidence, and rights awareness for undocumented immigrants. Frontierra, as our community organisation was called, became a hub and home for its participants and myself. Together, we created stories, based on themes the community chose.

In Corona, Queens, for a couple of hours once a week, we became superheroes. We traveled in time to fix the past and tweak the future. A chipped mug became a telescope. A coathanger turned into a seven-seat passengar car. We created images and scenes around the dreams that had gotten each of member of the group to cross the U.S.’s borders. Theatre became an invitation to play, and once that was accepted, the possibilities of where that took us were limitless.

We performed these stories in Spanish and in English at other organisations, based on the everyday challenges of being undocumented in the city.

Our method was Forum Theatre – developed by Brazilian director Augusto Boal for popular education movements. We invited our audiences to get up and replace the main character, so they could play out possible solutions to the challenges depicted on stage.

Our aim was to spark community discussion around undocumented immigrants’ rights. We worked hard on our stories. And our audiences, made up of undocumented individuals, community leaders and immigration lawyers, were engaged and actively responsive in finding solutions to problems that the communities faced.

One of our pieces, The American Nightmare, was the story of Julio, a hard-working family man trying to mobilise his work companions to sign a petition against their boss who refuses to pay them in time. But when their boss turns around and threatens to call the authorities, his friends abandon Julio, as they believe that without papers, they have no voice and would rather not loose their jobs.

One of our performances was at a centre in Brooklyn. As usual, we hooked up our modest black backdrop. The actors fidgeted nervously with their costume.

“This character will need your help,” Jesus, my friend and co-facilitator would always say to the audience. “Is there anything they could have said, or done, differently?”

That evening in Brooklyn, the room was packed but quiet with tension.

An audience member stepped up and replaced Julio in a confrontational scene with his employer:
“Hey Boss. Last time we asked, you said you’d pay us this month. ”
The boss looked up at ‘Julio’, then at the petition he held in his hand.
“Are you threatening me? Listen, young man, you need to remember where you are. You’re damn lucky to be working here in the first place!” He pushed his chair back, and stood. “You’ve got no papers – you think you can go around signing petitions?”
“But boss, we can’t keep working like this -”
“- You better be very careful about where you’re stepping, Julio!”

Vamos! A woman suddenly shouted in the audience. She stood up. Vamos, juntos! As she cried out, others stood up and joined her. Juntos, podemos!

Within seconds, the audience took over the stage and crowded around the boss’s desk, making their demand. F, playing the boss, tried to hide his grin. The spontaneous uproar was magical; once everyone regained their seats, an exciting forum began on the ins-and-outs of mobilising a community towards action.

It is about finding comfort and confidence in a sense of community. A sense of ownership. It is a tool aimed at the gradual reconciliation of fears, at creating a supportive framework for the (re)invention of one’s socio-political and emotional identity. There is uncertainty and risk in both theatre and displacement; the difference is, theatre gives a safe space to explore that and to transition from one state of belonging to another.

To the woman at Pastoral Migratorio, I’m not a doctor, a lawyer, nor an employer. I do not have a definitive answer to her question. I’m not interested in concluding with idealist suggestions of how to improve the lives of Colombian refugees or hispanic undocumented immigrants. Yet from the exploration the communities and I have experienced, came a determination to find expression despite the intimidation of the unknown.