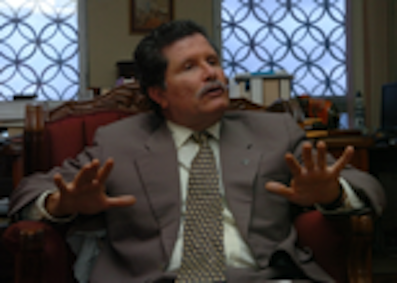 Trouble in paradise? Costa Rica’s week as a democratic dictatorship

One of the few things that I still remember through the alcohol-induced fog that surrounds most memories of my first year as as student in Leiden are the classes of professor Patricio Silva. Next to his knowledge about politics in Latin America in general, this professor excels in his examples of Latin American people seeking to ‘keep up appearances’. Getting fined because you´re driving around talking into a fake mobile phone, dying of heath exhaustion because if you keep your car’s windows up  you appear to have airconditioning. That sort of thing. The general logic behind these examples is that people have a huge need to be seen as ‘modern’ and that this desire takes precedence over all other interests that one would normally ascribe more importance. Just think about the ridiculous amount of Coca Cola consumed on this continent and you get what I mean.

In my study of Costa Rican politics, I come across a similar phenomenon. When talking about political and/or institutional reforms, a general notion in the political science literature is that politicians are rational beings that seek to advance their own interests. In this sense, the introduction of reforms (or any political action in general) is a means to create a more favorable political system that bestows political elites with more benefits such as votes, policy, or power. One limitation to this approach that I struggle with in practice, however, is that a second dimension appears to be at work. Call it culture, norms or the contextual outcome of the historical process of nation building; political reforms seem to be functioning according to an additional logic that is different in every country. In Costa Rica, it is the pride that the people take in living in a modern democracy. Or, as one of my respondents told me: ‘Francisca, you have to realize one thing, we have been a democracy for over a 100 years, we are the only Central American country that did not fall prey to decades of civil war and political turmoil, we are a modern state.’

Last week’s political developments form an excellent illustration of the role that this national self-image plays in politics. For those of you that missed it (yes, I know, Costa Rica is never on the news), we had a bit of an institutional crisis going on. Some even called it the beginning of a ‘democradura’, a democratic dictatorship. What happened is that Costa Rica has a very strong Supreme Court. After a term of four years the Supreme judges are reelected by a special committee and this reelection can only be rejected by a supermajority in the Legislative Assembly (38 out of the 57 diputados). Last week was the first time that the Assembly actually voted against such a reelection in practice and the leader of the government faction stated that this was meant as a clear signal to a Supreme Court that had become to politically active. Up to this point nothing special, just some inter-institutional bickering going on.

What the diputados did not see coming was the public fallout this measure created. Angry media, angry students, angry lawyers & judges, angry party leaders separating from their factions in the Assembly. And most of all, an angry Supreme Court that stated that this was nothing less than a technical golpe de estado (coup) that did away with all the institutional advances that had been made since the civil war. For those of you that missed that too: Costa Rica had a civil war in 1948, which resulted in some 2000 deaths, but which nevertheless was a majorly traumatic event that led the country to abolish its army and that remains a point of reference up to the present day. So now, in one day, the Legislative Assembly put itself on par with such countries like Honduras and Paraguay while simultaneously invoking civil war images. Not a good idea for a nation that takes pride in its reputation of belonging to the vanguardia democrática – the democratic frontrunners.

As we speak, many diputados belonging to the original supermajoritychanged their position and Magistrado Cruz is back in office waiting for the final formalities to clear. The self-image of Costa Rica as a modern democratic country trumped institutional self-interest. Clearly, you could retort that maintaining political stability is an important policy goal as well, and one that at times may take precedence over others. But that does not explain the extent of public outrage to begin with. And I thought: maybe professor Silva was right, maybe it all comes down to the desire to be modern.