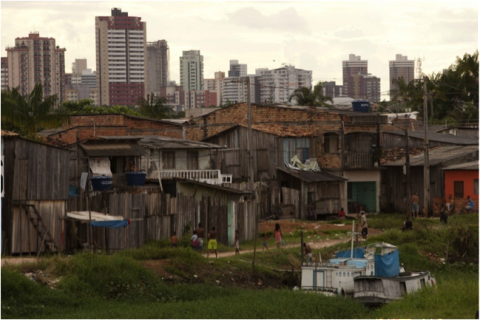 Violence in the favela’s

On November 4, 2014 ten boys and young men were murdered in the Terra Firme favela, one of the poorest and most violent areas in the state of Para in Brazil. The attacks happened just two hours after Antonio Figueiredo, a corporal in Brazil’s military street police, had been shot to death. Besides being a cop, Figueiredo was also the head of a violent criminal gang – mainly composed of police officers – that operated in the neighboring favela of Guama. In Brazil, these teams of police officers are also known as militias or death squads, and Para is the home of at least five of such police gangs. It is rumored that the militia took revenge for the death of one of their comrades, although the matter is still being under investigation. This blog describes this violent dynamic of everyday life in Latin American slums, where violence, corruption and a weak state influence one another, effectively creating a vicious cycle of lawlessness and fear.

Hours after Figueiredo’s murder, an audio clip started circulating on Whatsapp that warned residents to not enter “Guama, Canudos or Terra Firme tonight. It concerns your safety. One of our policemen was killed and we will be cleaning the area.” In a similar vein, a fellow officer of corporal Figueiredo posted a message on Facebook shortly after his death: “Friends, our little brother Pety, Corporal Figueiredo, was just murdered in Guama. I am going, I hope to count on the maximum of friends, let’s give the response”. Although he later stated that his post had been misinterpreted and clarified that “I asked for support in the sense of combating criminality. Our objective is not revenge”, this seems highly unlikely given that the police did not intervene during that fatal night when masked men on motorbikes slaughtered ten youngsters in a six-hour killing spree. Indeed, in its analysis of these events, Amnesty International reports details from locals who stated that the military police even blocked the streets with their cars to impede the entrance or exit of cars or pedestrians into the favela, suggesting police complicity. The events lead Alexandre Ciconello, a Human Rights Advisor at Amnesty International Brazil to conclude that “it was an orchestrated massacre to kill people”. Number of deaths by police authorities in Brazil. Source: InsightCrime

At the time of his assassination Antonio Figueiredo was on an extended medical leave, being forcibly retired and facing two homicide inquiries due to his militia activities. His forcible retirement is rather exceptional, however, as it is not uncommon for police officers to form part of a militia. In fact, these activities are an indirect result of many off-duty police and military officers doing part-time private security work. Even though police provision of private security is officially illegal, it is tolerated because it curbs higher salary demands. The appeal of quick easy money drives many police officers to make the transition from the provision of private security to organized criminal complicity and/or activities. They choose a life of crime for the same reasons as the drug traffickers: poor education, lack of money, and lack of career prospects. Many of the police and military officers in Brazil come from the lower echelons of society and choose the police force because of a lack of alternatives. Most of them have received poor training, bad equipment and low wages. Yet they face severe risks as they operate in an environment in which no less than 56,000 people were killed in 2012 alone. Naturally, this imbalance gives them incentives to cheat the system. The formation of police militias provides them with an opportunity to do so through competition or negotiation with drug gangs, usually in return for a fixed fee per month or a percentage of drug sales. Cases are also known where such militias extort residents to pay them money for protection. Lastly, several militias have found that the control of the delivery of many services, including the sale of cooking gas, electricity, and some private transportation systems, provides them with another means to prey on informally organized citizens.

The Terra Firme incident illustrates the consequences this corruption and state weakness have for society, as police militias not only terrorized an entire neighborhood to stay indoors but orchestrated the murder of ten citizens as well. Such incidents damage the state in a number of ways. For starters, it seriously undermines the state’s ability to build political capital and reduce trust in state institutions. If citizens feel like they are not sufficiently protected by the state then they may pick up the job of providing for their own security, or hire private security contractors. If they start to carry weapons themselves, even more as they do now (there are already up to 9.6 million unregistered firearms in Brazil) then violence can normalize and really get out of hand. When they opt for private security contractors, a less probable solution since most of the violence takes place in extremely poor neighborhood, it introduces another force vying for supremacy in the already complex array of coercive forces. In any case, the existence of a wide range of individuals and groups using coercive force helps to destabilize the state’s monopoly over the means of violence (Davis 2010). This is a clear example of how corruption and a weak state perpetuate violence.

Wedler, Carey. 2014 “What Does The Police’s Massacre Of 10 People In Brazil Tell Us About America’s Police State?” November 15. http://www.mintpressnews.com/what does-the-polices-massacre-of-10-people-in-brazil-tell-us-about-americas-police state/ 198915/ (retrieved March 15, 2015).