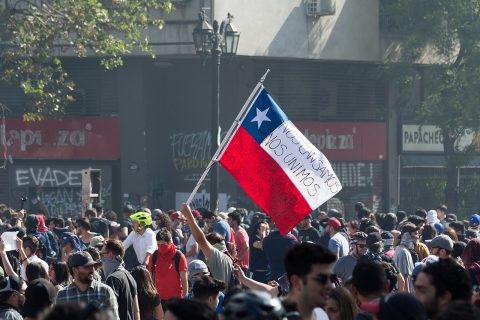 After almost thirty years of democracy in Chile, violent protests and military repression hits the country again. In reaction to a price hike of metro tickets on November 14, 2019, massive protests broke out in the country’s capital, Santiago. For the first time since the dictatorship of Augusto Pinochet (1973-1990) my family in Chile and all others present see the streets filled with armored vehicles, violence and destruction again. Within two months of military presence there are 5 confirmed deaths due to state violence, 3,583 injured, 208 cases of sexual violence, 777 official complaints of torture and 359 people with eye injuries.[1] But even with one eye less, the eyes of the people have opened, and not to be closed again.

On the 4th of september, 1970, Salvador Allende became the first marxist president to be elected in a liberal democracy. The turn of the right wing regime towards a left wing regime left many concerned – Chile was believed to transform into a second Cuba -. After three years of implementing socialist policies President Allende was removed from his office in a political overthrow backed by the United States. On September 11, 1973, a violent coup d’état took place under the command of General Augusto Pinochet. Supported by the Nixon administration, the Chilean armed forces and the national police took control over the country after murdering president Allende in the Monetary Palace.[2]

What followed was a bloody dictatorship of 17 years (1973-1990) in which Chile became the guinea pig of neoliberal free market economy, after the idea of the American economist Milton Friedman. The Chilean junta adopted Friedman’s economic theory, changing the framework for economic development in one in which the private sector can operate freely. Allende’s egalitarian agenda was nullified: nationalized goods became privatized again and Chile transformed into a right-wing, neoliberal nation-state.

Pinochet did not tolerate contradiction and during his 17 years of authority, many politicians of Allende’s regime, communists, socialists and other opponents disappeared. Under the dictatorship of Augusto Pinochet, a total of 3,200 people were killed. Of this number 996 bodies were never to be found again.[3]

Two generations of Chileans, my grandparents’ generation and my mother’s generation, learned to obey the regime. If you stood up, you disappeared. These generations lived through the disappearances of their family, their friends, their political representatives. They lived 17 years with everyday violence, structural repression and constant fear.

Even after the turn to democracy, the collective memory of repression and state violence never left the mind of everyone who had lived during the regime. When my grandma talks about Allende, her eyes fill up with tears every time again. The social trauma of the military junta of Pinochet has become part of the identity of many Chileans. Numerous people dedicated their lives to acquire justice for those who were tortured, those who disappeared, those who were killed – mostly without success -.

Before Pinochet distanced himself from his dictatorship, he changed the constitution, making sure that he and the military gained impunity for the atrocities committed under his command. Even though Pinochet was arrested in London on Octobre 16, 1998, he was never convicted for his crimes because of his alleged dementia. Pinochet died December 10, 2006, ironically on the International Day of Human Rights, without ever been held responsible for his deeds.

When Chile became a democracy again in the 90s, several important factors for a process of democratization to take place were ignored. Instead of reconstructing social relationships to restore social cohesion, perpetrators were reassured impunity and the military kept on living in gated communities. Justice never triumphed in Chile and therefore forgiveness and peace were never established in society. The continuous implementation of Pinochet’s economic and legal approaches, among other push factors, have led to the frustration and anger that is expressed nowadays by the demonstrations.

In 2006 Michelle Bachelet became the first socialist to be elected since the end of the dictatorship. Bachelet’s presidential terms are often seen as the most important step Chile has taken in the process of democratic consolidation. During her two Presidential terms (2006-2010; 2014-2018) she was the first to point out the importance of a new constitution. But Bachelet’s Presidential terms were not only received positively. During her second term several corruption scandals came to light, leaving a bitter aftertaste on Bachelets government for many Chileans.

Bachelet was alternated twice by Sebastian Piñera. First in 2010, and later after Bachelet’s second term in 2018 Piñera took office again. In many ways Piñera is the opposite of Bachelet. He is a businessman at heart, who made a fortune of introducing credit cards in Chile in the 1970s. His main policy is returning the economic growth in Chile[4].

Chile’s stability and prosperity was often called “The miracle of Latin America”, but the real miracle is how 50% of the Chilean employees survives with a mere $480 a month, in a country where prices are comparable to prices in the Netherlands. This in the only country in the world where neoliberalism was taken so literal that even water is a privatized good. In the country with the second highest college tuition fee of all OECD countries ($7.654).

The 30 pesos (0,04 cents) rise of the price of the metro ticket, was the final straw that broke the camel’s back. What seems like a minor change, has large implications for the lower class. Why should people who already spend around 20% of their monthly salary on transportation, start to pay even more? Why are taxes levied on the poorest in a country where 1% of the population controls 33% of the total wealth?[5]

Key is to stay unified and find political representation. A political voice and unity is crucial. Massive, spontaneous demonstrations have taken place in the region many times, but without representation, they generally have not led to a more stable political system and overall satisfaction of the inhabitants of the country. In 2001 we saw the Argentinazo taking place in Argentina. After massive demonstrations, without political representation, and a state of emergency, President de la Rua resigned and several interim presidents took office. What followed was a large depreciation of the Argentine peso. This economic crisis in Argentina continues to today and demonstrations are still common in the street view of Buenos Aires[6].

Because of the lack of protest leaders right now in Chile, demands of the demonstrators go from changing the constitution, to reducing government wages (President Piñera earns $15.500 a month), to the resignation of Piñera and his government officials. Even though Piñera’s first reaction was to declare war to the protesters, he quickly changed his mind when peaceful protests continued. He released a “New Social Agenda”, wherein he eludes the subway fare price increase. He promises an increase of the minimum wage and a 20 percent increase for government-subsidized pension plans. He also scheduled a constitutional referendum for April 2020.

Despite Piñera’s attempts to return to peace with his country, demonstrations continued all of November, December and January as well. Chile is not accepting minor changes. Now that the fire is burning, only real socio-political transformation will be able to extinguish it. Maybe this is what President Allende spoke about in his final speech, just minutes before his death, on September 11, 1973.

“I am certain that the seed which we have planted in the good conscience of thousands and thousands of Chileans will not be shriveled forever. They have strength and will be able to dominate us, but social processes can be arrested neither by crime nor force. (…) I have faith in Chile and its destiny. Other men will overcome this dark and bitter moment when treason seeks to prevail. Go forward knowing that, sooner rather than later, the great avenues will open again where free men will walk to build a better society.”[7]

After 46 years it seems Allende was right; social processes can not be stopped, and one day people will try to build a better society again. That day was the 14th of November, 2019.

[3] Paulina Abramovich, ‘Where are they?’: families search for Chile’s disappeared prisoners, The Guardian, August, 2019